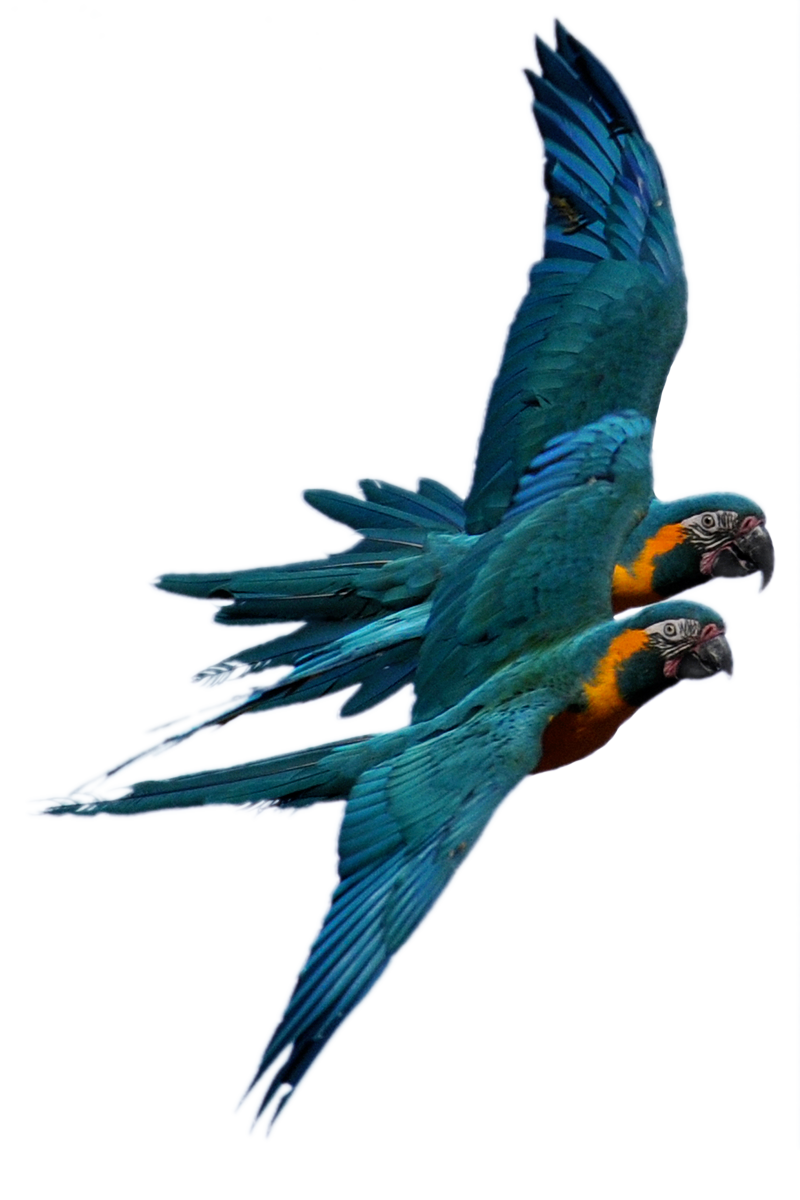 When starting with a baby parrot (6-8 weeks old), the first task is to just let the baby grow and feel secure. During most of the infant phase it will mostly sleep, eat and poop. During this phase we are spending some time everyday just holding the baby or letting it rest on a towel on our chest as we recline in a chair. This helps the young bird develop a sense of security in your presence. This is similar to what the parents are doing, just being there with the baby. We have never had any of our babies have clingy social issues later in their lives as some people claim will happen if you give them “too much human attention” at this age. I believe that allowing them to fledge and fly at this early age elicits a host of natural and instinctive behavior, such as independent thinking, that directly counters clingy behavior. Our babies have each gone through a dispersal stage, somewhat similar to human teenager phase, and in some cases, if we do not pay them enough attention, they more resemble wild birds than pets as they mature.

As thee babies body starts to become more covered with feathers the baby will start becoming more active and become more interested in observing the surroundings. At this stage they can become playful for short bursts but quickly tire and if they feel secure will often just fall asleep where ever they are and in some of the most humorous positions. If they do not feel secure, like if in a different room, they may attempt to find something to hide under – we supply an upside down cardboard box with a suitable sized doorway cut in the side for them to enter the box as they feel the need. The ability to retreat from scary objects or conditions and then advance again to further investigate as they feel comfortable is critically important to their development. At this age they are usually partially feathered and hand-feeding several times a day. They will often start wing-flapping exercises even before they have any wing feathers.

At about the time their bodies are becoming fully covered by feathers they will become much more active and eager to spend time with you out of the nest. Notice the wing feathers because as the wing feathers grow to the point that the outer flights start to cross behind their backs, these little birds are about ready to start making flights. Within a week or two, depending on the size of the bird, there will be a noticeable change and the bird will suddenly start making flights in the room. It is much like a switch has been turned on and once it starts there is no stopping it. Watch the shaft of the flight feather as they will turn from filled with dark fluid to clear as the feather matures. The process of natural selection has designed the baby bird to bring both the flight feathers and sufficient mental facilities to maturity at the same time in order to be ready to make those first flights from the nest. Once the flight feather shafts turn clear, the baby has mature feathers and can and will fly.

Initially the bird will make flights to get to some place it desperately wants to reach, usually not very far away. Often these are flights to or toward you. Sometimes they may be hops across the floor or short flights up to a higher perch. A lot depends on where you let them spend time playing. We often have them supervised on the floor with an assortment of toys. At this point we are not doing any training, only continued socializing and confidence building. We select the room to be fairly small so should they become startled and take off suddenly they cannot build up enough speed to hurt themselves should they hit a wall or window. Usually we do not have such troubles with a bird that feels secure in the room it is playing in.

Within a few days the bird will gain enough confidence to start making exploratory flights just for the joy and practice of making flights. These flights will usually have no easily identified destination and often result in the bird circling around the room and landing where it started. They have now demonstrated a level of self-confidence that I feel is sufficient to start teaching them some cause and effect relationships. In the wild these birds would now be following mom and dad around being shown how to be a parrot. This would include finding and identifying food and water sources, how to identify and react to dangerous conditions such as predators, flying as part of a flock, communicating with other flock members, etc.. To me this seems the appropriate time to start my formal training with them.

At this stage I start “capturing” the first behavior elements of recall – flying to me. Recall is coming to you when called. At first though, every time the bird flies to you, it gets something it wants, be it food, snuggling, head scratch or just plain being with you. Initially you will not have established a cued response – the cue is you signaling (calling and/or raised arm) the bird to come to you. At this stage you should reinforce the bird every time it flies to you, even the non-cued flights to you. The primary goal of recall is establishing a way to get the bird to come to you when you ask. At this age and stage in development getting the bird to come to you should be fairly simple. Getting it to recognize it should do so when you call it may take a little work but should happen fairly quickly. As the training progresses we raise the criteria so the bird must come when cued to get goodies for doing so. But initially, all flights to you count and should be encouraged and followed by a reinforcement of some kind. I encourage you to read more about stimulus control.

I then turn this captured recall behavior into a fun game of flying back and forth from me to a perch on cue. I will slowly start to ask the bird to fly to me in places where I am partially visible and then not visible, like around a corner in another room or through a door. In doing all this you are teaching the bird to come to the sound of your voice (not just respond to your raised arm) so should you have a problem with the bird when it gets outside it will already know how to find you even if it cannot see you.

“At this stage, what else should I be doing?”

I start clicker training the bird just as soon as it will eat solid foods. I start with targeting, touch the end of a target stick.

and at some point they only need to land on my arm and no longer need to touch the target stick. You now have a lured recall.

I highly encourage teaching the bird to fly to a perch and then back to you. In most baby birds that I have raised and trained the fly to me part was super easy to get started. The fly to a perch took only slightly more work. At this stage the bird is probably starting to eat solid foods and still eating hand feeding formula or softened pellets also. Find a solid food the bird really likes and then offer that when they fly to you and then send them back a short distance to the perch to eat the item. This way they learn that flying to you gets them goodies and then they have a reason to fly back to the perch: to eat the goody. Build this into a fun game starting short distance (whatever it will do initially) and expand that distance as the bird is capable until you are fully using the indoor space you have available. Then start calling the bird when you are just visible partially around a corner or just inside a doorway. Do this a few times then try it when you are completely behind the corner where the bird cannot see you. At first you may need to let the bird see an arm or your face to help them learn this step – this is called object permanence, the ability to track an object once it disappears behind another object. Expand this game until the bird is responding to your calls and is finding you in various places in the house.

When you have all this done then we can start thinking about what is needed to go outside and start this all over again.

I would also encourage giving an indoor flyer time in a cage outdoors near your home. You never know when the bird will escape out a door or window and it greatly increases the chances of the bird staying close to home, and thus being easier to recover, if the bird is calm, comfortable and familiar with the area it is loose in.